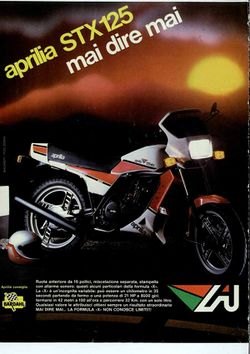 Presented at the Milan Show in November 1983, was marketed from March 1984 now moving forward to limit category: more powerful and more beautiful than the ST 125 from which it derives directly, immediately became a bestseller.

The STX 125 is undoubtedly a fine example of creativity and commercial sensitivity of men Aprilia without wasting time, turn the ST 125 in motion that perhaps should have been in 1983. Equipped with a fairing, front ferrule, front wheel 16 "(125 Italian first upstream) and embellished by the now indispensable automatic mixer, the STX stands decidedly at the top of the class and finally closes the period of transition in the motion that read- the progenitor ST had opened only a year earlier. The STX not only looks like a real bike, but you drive as such. The emotions are so many.

The STX immediately presents itself like a bike more mature and not only for the presence of the windshield and front toe. The color pearl white with red inserts / blacks is certainly modern and successful and comfortable saddle is now enhanced Aprilia logo on both sides. The oil tank is the space immediately in front of the headstock and the plug is easily accessible, being located just before the petrol cap.

The instrumentation is mounted on the same ST, but now all the lights work (the mixer is there now!) And the odometer is also enriched the part. The electric controls are now manufacturing Italian (CEV), although, in the opinion of the writer, are perhaps a little less pleasant for Magura previously installed on the TS.

The main differences concern the adoption of tractors introduced by different design and in particular a front wheel 16 ", whose presence has forced a different design of the steering geometry so that the angle of the boat changed from 26 ° 30 'to 28 ° 30 "and fork legs were stretched to 25mm and resulting in slight variation dell'avancorsa increasing from 86 to 87mm. The rear shock is now a Marzocchi (always free settings) instead of the previous Sebach. The rest of the chassis remains unchanged (including brakes) except for the growth of the entire from 1355mm to 1370mm, for the benefit of greater stability at high speeds on straight. The dry weight of 113kg 104.5 halls.

The valid Hiro ST's engine remains virtually unchanged, although it has been honed on respiration and discharge to the advantage of dispensing. Of course the most interesting novelty in the representation of the automatic mixer, or the presence of oil pump manufacturing Dell'Orto inserted into the crankcase and right on an average calibrated mix of 1, 5%. According to data collected at the time, the gain in terms of power output than the engine mounted on the ST is about 0.5cv or 18.48cv to 8500giri instead of 18.07cv to 8250giri. Not bad considering the limited interventions and the fact that the mixer "eats" a little more 'power.

More radical, however, assistance where all transmission gear ratios have been lengthened and decreased the secondary reduction ratio and the final pass in the sixth, from 1:8,04 to 1:7,77; the maximum speed However, due to increased power and extension is changed from 126.8 to 129.7 km / hour.