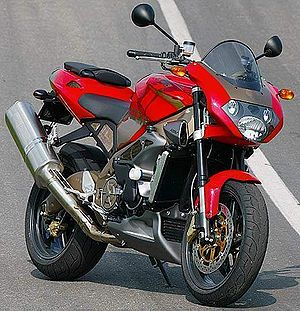 Most Nakedbikes are detuned shadows of their sportsbike brothers. Not so Aprilia's Tuono, which is essentially a stripped RSV-R. Yeehaa...

From concept to customer in just six months is a pretty steep development path for any new model these days - but that's just how little time it's taken Aprilia to get its contender in the flourishing Naked streetrod class into production.

Launched at the Bologna Motor Show last December, just five weeks after project leader Klaus Nennewitz and his team were given the go-ahead by company management to come up with the new model, the Aprilia Tuono began hand-built production on May 15 in the company's Scorze factory.

To begin with, there's just a single limited-edition batch of 200 high-end individually-numbered bikes, each replete with carbon-fibre, titanium and kevlar components, and costing the not inconsiderable sum of Euro 15,000 worldwide ($A25,000) - plus GST and shipping for Australia, which would bring it closer to $29K!

Still, that does include a titanium racing exhaust and the EPROM chip to retune the Nippondenso EFI to suit.

But given that a fully-faired RSV-R is $30K Down Under, you might conclude this is a hefty premium to pay to have Aprilia strip all the bodywork off its highest-performance V-twin sportsbike, then bolt on a lot of handmade hyperparts to pretty up the result and make it look exclusive.

Is it worth the bucks? This is an immediately addictive motorcycle and one which delivers Superbike performance in streetfighter guise.

It's undoubtedly a more potent package than the Ducati S4 Monster, itself essentially a stripped-down ST4 sportstourer producing 101ps and scaling 193kg, against the Aprilia's 130ps from a 181kg motorcycle (2kg lighter than the RSV-R it's derived from). 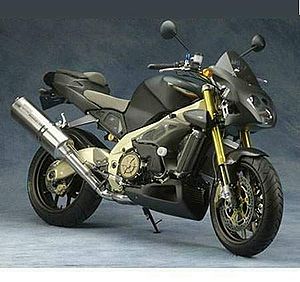 That's a lot of extra performance, making for a more focused as well as a more exciting bike to ride - a fact which sets the Tuono apart also from the more style-conscious 105ps Cagiva Raptor.

Really, the only Nakedbike competitor the Tuono relates to is the latest Triumph Speed Triple with the 955i Daytona engine, because the one-litre members of the Honda Hornet and Yamaha Fazer clans are much bulkier, less potent and altogether more low-rent than the Aprilia.

Project leader of the R&D team which worked flatout to produce the Tuono in such a short time span is 35-year-old German-born development engineer and committed everyday biker Klaus Nennewitz, who before obtaining his MechE degree qualification worked for 18 months in the USA for offroad specialist ATK.

Since joining Aprilia in 1995 he's headed up development of first the Pegaso single, then the Falco and now Tuono V-twin models. 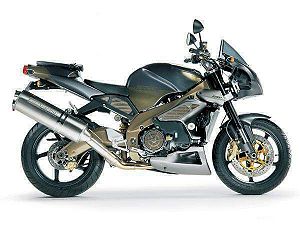 "We've been thinking about a nakedbike for a long time," admits Nennewitz, "but after a few false starts we only began focusing on creating the Tuono right at the end of October last year.

"We already knew what the general layout should be, so it was just a styling issue to get the prototype ready for the Bologna Show five weeks later. One of our in-house designers, Giuseppe Ricciuti, who produced the RSV Mille range, as well as the RS250 and the Scarabeo big-wheel scooter, worked flatout to get the job done.

"When we looked at the finished bike, it was as if you could hear a clap of thunder - it just looked right, so that's why we gave it that name!"

To create the Tuono, which means 'thunder' in Italian, the R&D team took the top-of-the-line RSV Mille R sportsbike and stripped the bodywork off it, retaining the same essential engine and rolling chassis package, complete with top-spec OZ wheels, Brembo brakes and fully-adjustable Öhlins suspension front and rear.

This incidentally explains why the Tuono could be fast-forwarded into production so quickly. It retains the essential chassis dynamics of the RSV-R - just with the aluminum twin-spar frame and strutted swingarm painted gold to simulate an anodised finish, and a beefier, 70mm wider one-piece MX-style handlebar tapered down to 22mm diameter to accept a standard RSV-R twistgrip.

The 'bar is mounted on a 170mm tall aluminum riser made from a solid billet of Ergal and bolted to the upper triple clamp, which though special to the Tuono retains the stock offset of the RSV-R, delivering 99mm of trail matched to a 25-degree head angle.

This smartened-up chassis package has been clothed by Ricciuti in bodywork styling which, says Nennewitz, was deliberately uncompromising.

"We wanted to create a mean-looking, aggressive, streetfighting Superbike which still retained the Aprilia family look, but where the quality of the materials also shone through.

"We chose to mount a small fairing, which promotes improved stability at top speed," adds Nennewitz. "This bike will run to 250km/h on the same 17/42 gearing as the RSV-R, and without some protection the rider has to hold on too tight to optimise stability." 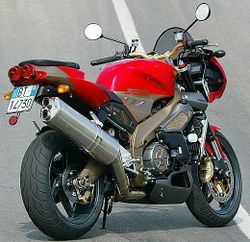 So the small nose fairing incorporates Aprilia's trademark triple-headlamp light cluster, and has a domed screen which is a little higher than the one on the RSV-R's full fairing. Together with the carefully angled flanks of the mini-fairing, this deflected quite a lot of air from my upper body, meaning that only above 200km/h did I start to worry about getting blown off the back.

Matched to this are various bolt-on carbon parts like a chin fairing, a chainguard, and both water radiator sideguards and extraction ducts. There are also two hefty-looking endurance-style plastic crash protectors on either side, to help protect all this costly stuff in the event of a get-off.

This happy blend of Superbike engine performance and a topline streetfighter handling package resulted in one of the most enjoyable days I've spent on a bike in the past year, carving turns on one of Italy's premier Racer Roads, the Passo del Muraglione running between Forli and Florence across the top of the country's central spine of Appenine mountains.

This is a Naked sportsbike like no other - one that's a satisfying thrill to ride along such a twisty, demanding road with switchback hairpin turns, interspersed with third and fourth gear zaps down the next short straight, before standing on the benchmark Brembo brakes to trailbrake into the next bend.

And all with a degree of total control that seems at odds with the Tuono's upright riding position and Cap'n Sensible riding stance.

A key factor in this, though, is the good leverage I got from the one-piece enduro-style handlebars, which together with the stock RSV-R footrests delivered a fantastic riding position.

One advantage of the higher 'bars is that I no longer had to wrap my arms around the stock Mille R fuel tank, which consequently seems a lot slimmer than on the repli-racer it comes from, with my knees snuggled in nicely to the cutout flanks.

This in turn makes the unfaired Tuono seem considerably slimmer and less porky than any RSV Mille, and indeed ground clearance with the higher RSV-R footrests is excellent.

I tried pretty hard to use the great grip from the Pirelli Dragon Super Corsas to touch something down, but came up short.

Seat height is the same as the RSV-R at 820mm, so you need to be fairly tall to sling a leg over easily, but the seat itself is all-new, with carbon-kevlar pad covers which provide extra grip.

Worth noting too that the sidestand is easy to pull out while sitting on the bike, and is exactly the right length. Plus the mirrors didn't vibrate, and gave me a reasonable view behind.

As for niggles, it's hard to read the red digits on the analogue tacho easily in sunlight. Oh, and the hydraulic clutch is a little stiff, even if there's a smooth pickup through the adjustable lever.

And it's surprising you have to use a manual choke on a fuel-injected motorcycle!

The Tuono's 998cc dry-sump engine offers the highest state of tune of any of Aprilia's longer-stroke 97mm x 67.5mm 60-degree V-twin eight-valve engines (the short-stroke 100mm-bore SP engine in Nori-chan's World Superbike racer is a homologation special), and has the exact same mechanical specification as the RSV-R.

The Nippondenso EFI retains the same 51mm throttle bodies and dual ignition, but has been revamped to deliver more low end and midrange torque, via a shorter intake length and corresponding remapping of the engine management system. The result is a smoother pickup low down than on the Mille R, though with the performance camshafts which are installed I needed to use the slick-shifting gearbox to keep the Tuono revving above 4000rpm in order to produce impressive acceleration.

Above four grand there's no undue transmission snatch or engine vibration, and the twin counterbalancers do a good job of smoothing things out at higher revs, while the balance weights mounted at either end of the wide handlebars do the rest.

Then at 7000rpm there's an extra kick of power as the engine surges stronger and with impressive speed towards the 10,500rpm revlimiter.

It's a bike with impressive, usable drive all the way through the rev range, with a torque curve that peaks early, and is then supplanted by max power at higher revs. What a nice real world ride.

Just one minor criticism of the powertrain: it would have been good to see the bike running lower overall gearing, rather than the RSV-R's 17/42 ratio, because this would cut out having to use bottom gear as often, and avoid having to run through towns in third or fourth gear to avoid transmission snatch.

While this is still a Superbike in streetfighting mode, it would be better to gear it down a couple of teeth on the rear sprocket, especially for the kind of town use it's likely to see more of than its R-model genesis.

Agreed, says Nennewitz - except that it's an arcane twist of EU homologation rules that once you change the overall gearing by even a single tooth, you then have to put the bike through the whole emissions, safety and dynamic homologation process again. So, buy the bike as is, then spend a few bucks buying a two-teeth larger rear sprocket from your aftermarket dealer, and you'll have an even better motorcycle than the one you just bought!

The Tuono is pretty close to my ideal everyday ride. This is truly a bike that delivers the best of both worlds.

Just think about laying it into a bend, and the Tuono's already got there and done it - not in a twitchy or nervous way, just totally responsive and easy-steering.

Gone in too deep and need to correct a line? No problem - just finger the adjustable brake lever and just pull it back on line a little tighter with those wide handlebars.

Hit a bump or series of ripples in the typical mountain road surface while cranked hard over, and even on the standard settings the compliant Öhlins suspension just eats them up.

But then find a long bit of more-or-less straight road and revel in the Tuono's tigerish engine performance, the lusty lilt of the narrow-angle V-twin engine rising an octave or two as you pour on the power wide open in top. There's none of the wobbles or weaves so many other performance nudiebikes throw at you when you gas them wide open at top speed.

The Tuono's a thoroughbred thunderbike: it's been well sorted.

It's also far too good a bike for just 200 well-heeled owners worldwide to have the privilege of owning one. If Aprilia can market a Mille R for $30K, then surely it must be able to strip the bodywork off one and Tuono-ise it with humble volume-production plastics instead of carbon-fibre, then sell the result for around the low 20K mark.

Until Aprilia does that, the bike that makes Ducati's S4 Monster second-best will only be the preserve of a few lucky owners. Makes you wonder what took them so long to come up with it, though... 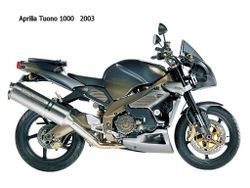 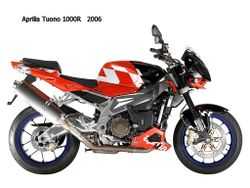 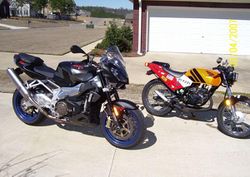 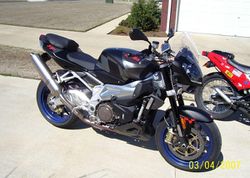 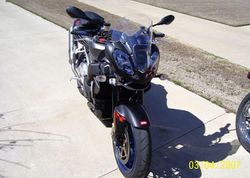 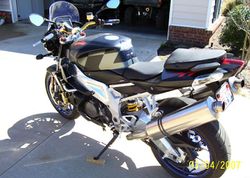 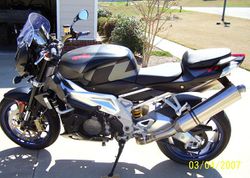