The engine was a liquid cooled in-line three, four-stroke. A 78.7mm bore x 78.7mm stroke result in a displacement of just 955.0 cubic centimeters. Fuel was supplied via a double overhead cams/twin cam (dohc).

The bike has a Gears transmission. Power was moderated via the Wet multi-disc, manual. 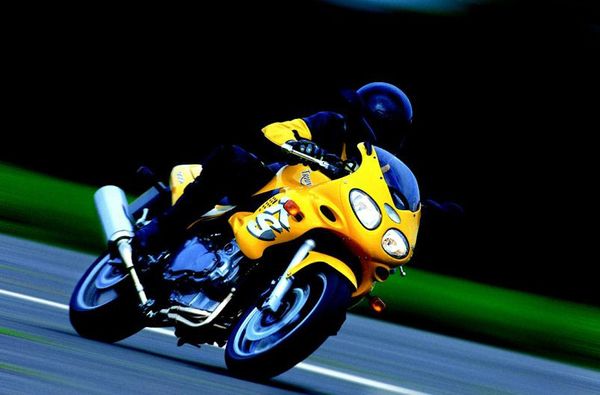 The 1999 Triumph Sprint RS is powered by a revised version of the Daytona engine. It now comes with steel cylinder liners, as opposed to the coated aluminum ones of the Daytona. The pistons have also been upgraded to match the cylinders, while the new camshafts have new lift and timing for more midrange nerve.

And of course, the ECU was reprogrammed to match all the changes the 1999 Sprint RS received. A sport bike by nature, and endowed with track-ready the Sprint RS can also serve as a good daily ride with tons of fun and excitement about it.

The 2000 Sprint RS is a half-faired sport bike with excellent streetability and great handling. Powered by the same brawny injected triple engine which hums inside the Sprint ST and Speed Triple, the Sprint RS delivers well above 100 hp and comes with plenty of torque for great cornering and city slicing nerve.

And if you feel that you could share the sizzling riding experience with a passenger, the rear cowl can be easily removed, too.

The 2001 Triumph Sprint RS is a beast developed on the track, and refined on the street, a machine that's equally capable to deliver racing adrenaline and a rewarding on-road experience. Powered by the same mill which gets the Speed Triple going, the Sprint RS sports a half-fairing design which mixes weather protection and aggressive looks.

New for 2001 is the second-generation EFI engine with a closed loop injection system and the Acidic Yellow livery.

A sporty nature and enhanced rider comfort are the main things about the 2002 Triumph Sprint RS. The in-line 3 mill delivers plenty of power through the entire rpm range and makes this bike as enjoyable in the city as it is during longer hauls on the open roads.

The half-fairing design provides better weather protection while maintaining the aggressive stance of the machine. Great for a track day and equally suitable for a two-up vacation, the 2002 Sprint RS is a nifty sport-minded all-rounder with the unmistakable Triumph character.