The engine was a liquid cooled in-line three, four-stroke. A 76.0mm bore x 65.0mm stroke result in a displacement of just 885.0 cubic centimeters. Fuel was supplied via a double overhead cams/twin cam (dohc).

The bike has a 6-speed transmission. Power was moderated via the wet plate with hidraulic cluch.

The 1992 MY Triumph Trophy 900 is a touring machine which shares all its traits and engineering with its bigger sibling, the Trophy 1200, except for the engine, and the sticker that says "900" instead of "1200" of course.

The two-wheeler sports a four-stroke, liquid-cooled, 885cc, transverse three cylinder engine and a six-speed manual transmission, which produces 98 horsepower and 83Nm of torque. This makes it a great choice for long hauls, having good gas mileage and a comfortable rider and even passenger stance. This makes it suitable for a weekend stroll or a full-out transcontinental vacation, no matter the trip, the Trophy 900 will always be up for the task. 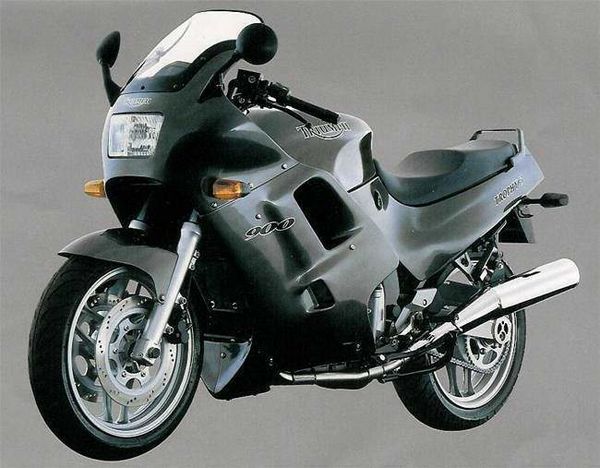 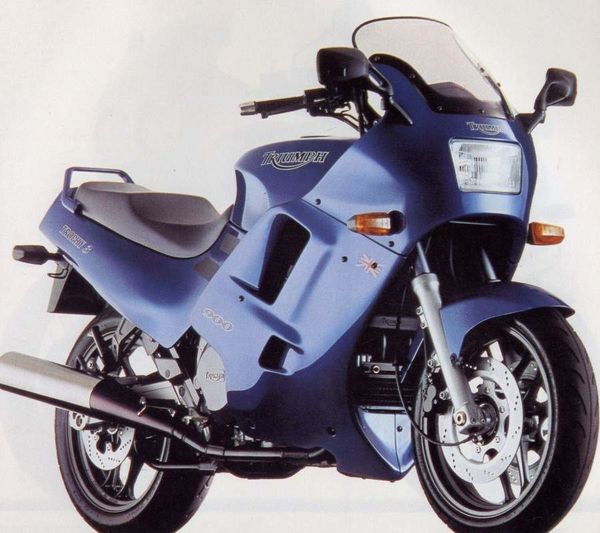 Following Hinckley's "modular design" concept, the 1993 MY Triumph Trophy 900 shares most of its innards with the other Triumph models in the 900cc category, the thing setting it apart being its engine mapping, optimized for more mid-range torque and, of course, the bodywork and comfort department, to make it a true touring machine.

Whether one decides to use it on his daily commute to and from work, a weekend stroll through the countryside or a transcontinental vacation, the Trophy 900 is up for the task.

The 1994 MY Triumph Trophy 900 is a bulky touring bike, particularly suited for those riders with a bigger inseam and arm length. But once you get it on the road, it will leave you the impression that you're atop a mid-sized superbike.

The suspension and frame offer a good response when going around the bends, and the ride position is as comfortable as can be, with a spacious seat for both the rider and the passenger. Its four-stroke, liquid-cooled, 885cc, transverse three cylinder engine produces 98 horsepower and 83 Nm of torque, which is more than enough to make it's massive 217kg dry weight race across the motorway.

For British-built motorcycles fans, and also with a taste for the longer hauls behind the bars, Triumph has released the 1995 MY Trophy 900. It sports a liquid-cooled, four-stroke, 885cc, transverse three cylinder powerplant mated to a six-speed manual transmission, which produces 98 horsepower and 83 Nm of torque. The engine mapping has been designed for more mid-range power, so it can sustain longer trips without putting a strain, neither on the rider, nor on the bike itself.

An up-right rider position, plus a spacious seat for the passenger, combined with a full fairing and adjustable tri-link rear suspension adds up to a bike as comfortable as one can be. 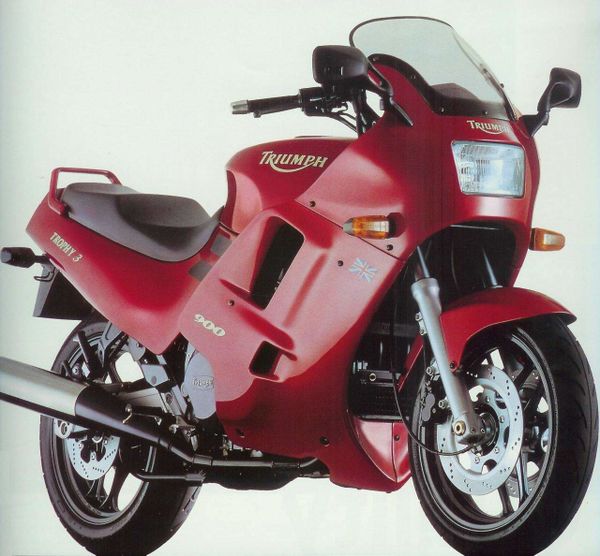 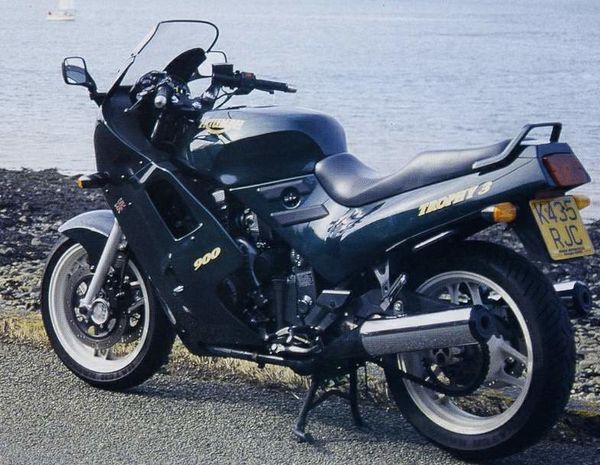 Able to cope with either busy city traffic, weekend countryside strolls or full-range vacation hauls, the 1996 MY Triumph Trophy 900 is a versatile and, more importantly, durable touring machine. Based on the Brits' "modular design" concept, it shares its spine and innards with the other 900cc Triumph models, but adapted for the Trophy to ensure excellent touring abilities.

It sports a liquid-cooled, four-stroke, 885cc, transverse three cylinder engine mated to a six-speed manual transmission, and produces 98 horsepower and 83 Nm of torque. The engine has been tweaked for more balanced power delivery, throughout the rev range.

The 1997 MY Triumph Trophy 900 is an excellent, British-made, touring motorcycle, capable of carrying large loads in its standard, color-matched, hard saddlebags plus the rider and a passenger, over large distances, quickly, efficiently and in style. The four-stroke, liquid-cooled, transverse three cylinder engine offers great power delivery at low to mid revs while still keeping a punch for top end rpms.

In the comfort department, it comes standard with a dual-seat which offers the rider and the passenger lots of space and a full fairing plus capacious panniers for excellent protection against the elements. 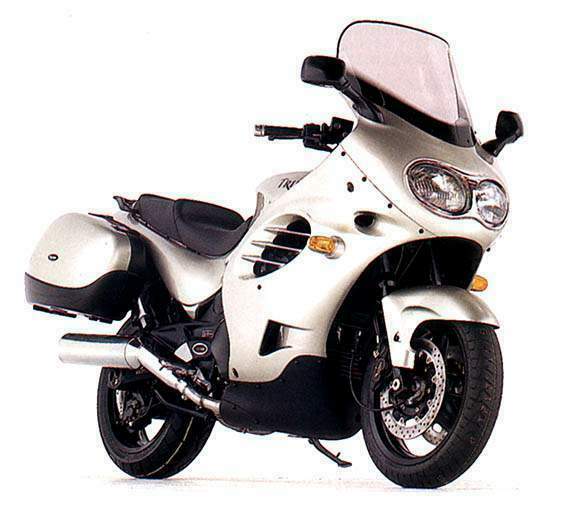 The 1998 MY Triumph Trophy 900 has received a number of upgrades that increase the overall comfort and load-carrying capacity of the machine. Hard, lockable, color-matching saddle-bags now come as a standard feature. The seat has been redesigned for more comfort for both the rider and the passenger. And, as far as protection from the elements goes, a full fairing plus a tall wind-screen will protect you from almost anything Mother Nature may throw.

On the tech/engine side, it sports the same liquid-cooled, four-stroke, 885cc, transverse three cylinder engine mated to a durable six-speed transmission, which produces 98 horsepower and 83 Nm of torque. 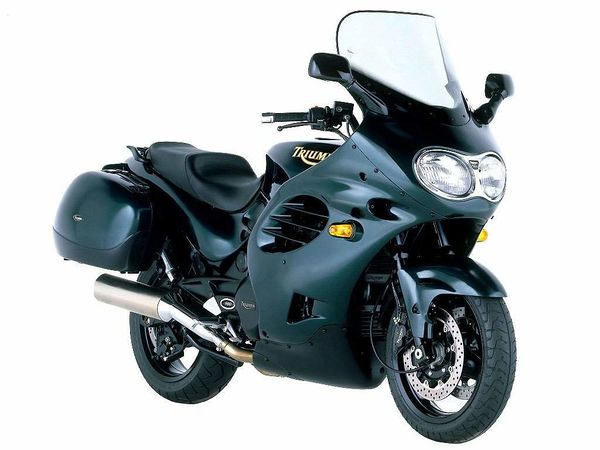 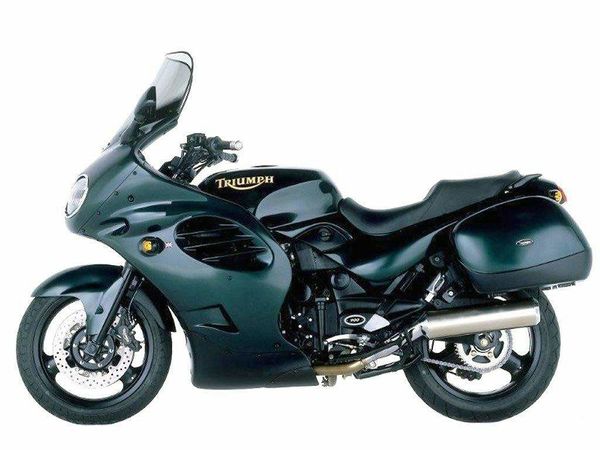 The 1999 MY Triumph Trophy 900 sports the same engine and rigid steel frame as its predecessors. A smaller, yet, a little nimbler sibling to the Trophy 1200 flagship tourer, it has the same road composure, making it an excellent touring machine, whether for daily commutes or transcontinental vacations.

Coming standard with color-matching, hard saddlebags, it can carry impressive loads even when riding two-up, without affecting the engine's performance. On the comfort side of things, a spacious dual-seat plus full fairing and big, capacious panniers to protect from all types of weather make it a sound choice in the touring bike category. 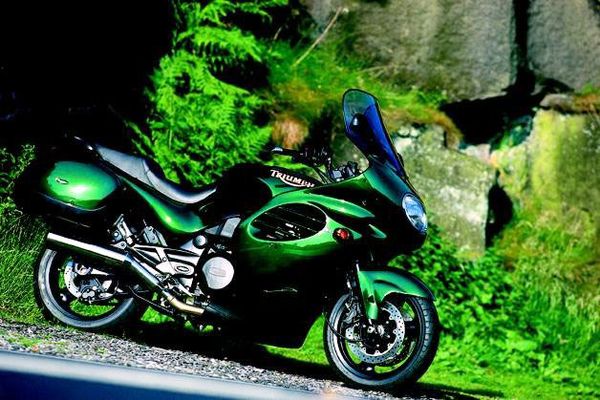 Just as its name says it, the 1999 Trophy 900 is the smaller brother of the 1200 version. A middleweight touring machine for those in search of a more manageable power delivery, this bike retains all the road worthiness and long-range traveling comfort of the big-bore beast.

A bike engineered for heavy loads, the 1999 Trophy 900 boasts dependable performance even when riding two-up and with plenty of luggage in the integrated sidecases. At the same time, excellent weather protection is making long hauls aboard this bike safer and more comfortable. 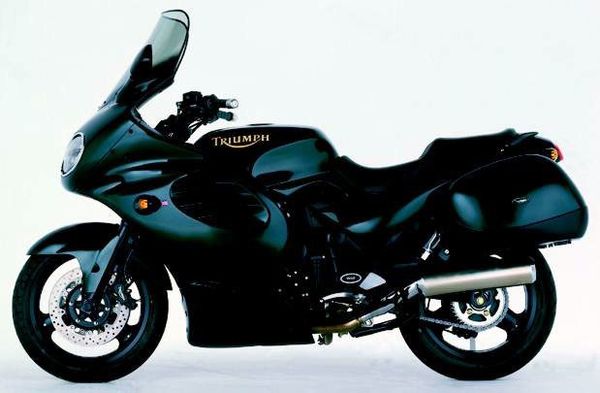 The 2000 Triumph Trophy 900 is the smaller sibling of the mighty 1200 version and shares much of the comfort and feel of the big-bore machine. Ergonomics, luggage-carrying capabilities and rewarding long-range worthiness are all intact, providing the rider and pillion with a smooth, comfy ride across the state line.

This Trophy is powered by Triumph's 885cc triple engine and with 25 liters of fuel aboard, it spells true touring capabilities, allowing more riding joy and less useless stops.