The engine was a air cooled in-line three, four-stroke. A 90.0mm bore x 68.0mm stroke result in a displacement of just 865.0 cubic centimeters. Fuel was supplied via a double overhead cams/twin cam (dohc).

The bike has a 5-speed transmission. Power was moderated via the wet. multi-plate.

It came with a 100/90-r19 front tire and a 170/80-b15 rear tire. Stopping was achieved via double disc. nissin 2-piston floating calipers in the front and a single disc. nissin 2-piston floating calipers in the rear. The front suspension was a kayaba 41mm forks with polished lowers. while the rear was equipped with a kyb chromed spring twin shocks with adjustable preload.. The Speedmaster was fitted with a 5.1 Gallon (19.30 Liters) fuel tank. The bike weighed just 509.27 pounds (231.0 Kg). The wheelbase was 62.99 inches (1600 mm) long.

Raw and dropping all the bells and whistles, the 2002 Speedmaster takes the acclaimed success of the America model one step further into the realm of mean cruisers. Built for comfort and speed alike, this beast is also proud to show off its tidy, compact and uncluttered construction, with the beefy front end accentuating the aggressive stance.

A classic British roadster with some American DNA in it, the 2002 Speedmaster is the definitive Triumph prowler.

Derived form the iconic Triumph America, the 2003 Speedmaster boasts the obvious performance-focused roadster character, with a clean, uncluttered, bare-knuckle look and spirit to match it. Minimalist details keep the 2003 Speedmaster in the retro roadster zone, with the tank-mounted rev counter and bar-mounted speedo, two-tone paint schemes and chunky bullet exhausts.

Add in a sculpted seat made for long hauls, cast wheels with dual front rotors and beefy forks, all screaming road terror.

Clean, compact, uncluttered and menacing, the 2004 Triumph Speedmaster is a roadster waiting for you to show the direction and which will then carry you far beyond the state line. Low, muscular and brawny, the 2004 Speedmaster is as good a leisure bike as it can serve its owner as a machine for daily commuting.

And with plenty of accessories to enhance both touring functionality and looks, you can rest assured this bike will be exactly the way you want it.

With a raked-out fork, the 2005 Speedmaster is a classic Triumph bike which blends in the unmistakeable British attire with the America cruiser DNA into a road machine in a class of its own. Powered by the mill of the Bonneville platform, the Speedmaster comes with plenty of passing power and solid fun, both in and around the city.

Comfortable and with laid back ergonomics, the 2005 Speedmaster is also great as a middleweight cruiser for longer hauls, especially when endowed with touring accessories.

The spartan, and even menacing straightforward design of the 2006 Triumph Speedmaster spell riding freedom and this can be seen form any angle. A bold, compact yet comfortable machine built for the open highway, but whose nimble character also makes it a good choice for countryside or mountain roads, as well as for urban rides.

Cast wheels, gunslinger straight exhausts, and zero unnecessary bling speak for themselves: the Speedmaster is for riding, and not for showing off. A wide range of accessories is available, though, all easy to install bolt-on parts to make this bike as unique as yourself.

The 2007 Speedmaster is a Triumph middleweight cruiser massively contaminated with roadster DNA: a beefy front wheel, chunky forks and a straight bar, a much more compact and robust architecture, they all sum up to a bike which looks almost evil.

However, we're still dealing with a nimble middleweight machine which will effortlessly filter through slow traffic, proudly showing off its commuter capabilities. For the longer getaways, the 2007 Speedmaster is equally fun and comfortable, as its ergonomics have been revised with a focus on touring. 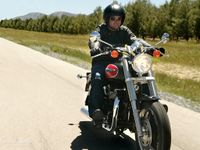 The Speedmaster retains its low-slung and nimble street prowler chassis it now has more low-down torque thanks to its new 865cc, air cooled, twin cylinder engine. And due to the 270 degree firing interval each power pulse from each piston is delivered in a seamless, languid flow that hooks the fat 170 section rear tire to the road.

Looking for a classic British cruiser with ageless styling? If middleweight is your segment, then look no further than the 2009 Speedmaster, a hotrodded bike with plenty of attitude and character, evoking the mean machines of the 60's.

The Speedmaster brings in slash cut exhausts, black engine cases and black cast wheels with polished accents, liberal use of chrome and dependable 3-disc brakes which makes it clearly that this bike was engineered fo being ridden hard.

The 2010 Triumph Speedmaster is proudly showing off the neo-retro looks, with the 60's styling upgraded to the present day standards, but still keeping the bike in the classic range. Stripped down to the base necessities and retaining only the badass DNA, the 2010 Speedmaster brings forth blacked engine cases, shorty guards, slash cut exhausts and contrast cut cast wheels.

The generous, sculpted seat provides ample support for the rider while integrating with the fluid lines of the fuel tank. Powered by the proven 865cc Triumph parallel twin mill, this bike also brings in the convenience and reliability of EFI.

The new-for-2011 Triumph Speedmaster features a host of updates for improved riding experience and an even more aggressive appearance. In terms of ergonomics, the new model comes with a low 690mm seat height and new and wider handlebars. In terms of styling, the bike comes with a new 19” cast aluminum front wheel with single disc brake and ‘skinny’ tire, blacked out engine cases and a new front headlight design. Two color options are available for the 2011 model: classic metallic Phantom Black and Cranberry Red, a new color which is debuting on the Speedmaster.

The 2012 Triumph Speedmaster is all about naked, stripped down chopper attitude: a slinky front tire shoeing a 5 dual-spoke cast wheel with contrasting accents and with a similarly skinny fender to match. Add in the svelte forks and the simple front end for a classic 70's look and the sculpted seat keeping riders close to the ground for a more confident feel.

And with Triumph's unmistakeable 865cc parallel-twin powerplant, behind the forwarded controls, the Speedmaster is surely an head-turning bike which will offer a most rewarding ride, day by day or during longer trips.

The 2015 MY Triumph Speedmaster combines the best from both sides of the Atlantic, American classic looks and style with British engineering and reliability.

On the tech side, Speedmaster pleases the rider with its air-cooled, four-stroke, 865cc parallel twin engine that's perfect for both everyday use, or long-hauls, if one decides to take it on a vacation. Complimented by a classic cruiser-like build and feel, it is sure to stand out, whether on the 66 or on the British busy motorways.