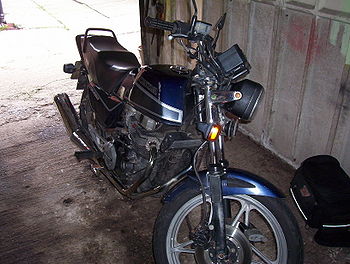 With its 450cc engine derived from the original Superdream CB400N, it proved to be a big seller in Brazil and South America where the earlier Superdreams sold well, too, due to their low running costs and good reliability. Honda decided to build upon this legacy with the 450DX; however, it didn't sell in great numbers in the rest of the world due to poor build quality and a few inherited design problems from the Superdream.

The 447cc Superdream derived motor produces a claimed 43BHP, and the bike has a manufacturer specified dry weight of 189KG.

It was quite advanced in some ways, featuring hydraulic disk brakes both at the front and back as well as a 6 valve head. In other ways, however, it was harking back to the late 70's with its retro styling, semi automatic camchain tensioner and balancer system.