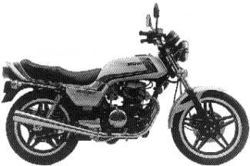 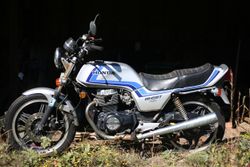 The CB450T'82 was sold in 1982 in one of two colors: Pleiades Silver Metallic or Black. The stripes on the black bike were orange and red while on the silver bike they were light blue and dark blue. The engine color was black. The engine was a 447cc SOHC 3-valve parallel twin with a 6-speed transmission. The serial number began JH2PC050*CM000011.