The engine was a air cooled dual cylinders, four-stroke. A 57.3mm bore x 63.0mm stroke result in a displacement of just 162.7 cubic centimeters. Fuel was supplied via a overhead cams (ohc).

The tank, side covers, fenders, and fork legs were silver. The engine was a parallel twin with dual carburetors and linked to a 4-speed transmission. The serial number began CL160-1000001. This model with a skid plate and no electric starter was built only in 1966. Later models were actually dealer-installed CL kits on CB models.

The CB160 came in four available colors: Black with Silver, Scarlet Red with Silver, Blue with Silver, and White with Silver. The gas tank, frame, forks, and rear shocks were the basic color (black, red, blue, or white). The headlight and taillight were also the basic color. The fenders and side covers were silver. The seat was blue on the blue unit, but black on all the rest. The engine was a 161cc OHC parallel twin with dual carburetors. The transmission was a 4-speed. The serial number began CB160-1000001. 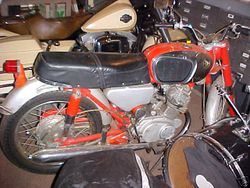