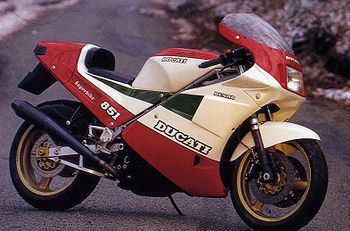 After buying Ducati, Cagiva invested in the development of another V-twin, but with liquid cooling, and four valve desmodromic heads. Massimo Bordi, had designed a 4V Desmo in 1973 for his thesis at the University of Bologna, and with Cagiva in 1985, saw his updated ideas come into production as the Desmoquattro. Based on the Pantah motor, but with liquid cooling, fuel injection, and desmodromic four valve heads (with an included valve angle of 40 degrees), the 851 made Ducati race competitive again.

The original Desmo Quattro was an experimental 748 cc 4 valve racer (seen at the Bol d'Or in 1986) and used 750 F1 Pantah crankcases. Bordi collaborated with Cosworth to develop the heads, but in the time they had, they were only able to reduce the included valve angle of the desmodromic engine to 40°, while less than 30° was possible with valve springs. Ducati stuck with the desmodromics. The subsequent 851 road bike had stronger crankcases, while the heads and valves remained the same; designed to fit above the 88 mm bore of a 748 cc version.

The 1987 – 1988 Ducati 851 Strada used the signature steel tube trellis frame, adorned with Marvic wheels, Brembo brakes and Marzocchi suspension. That first release was criticized for its handling, so front wheel was changed from a 16 inch to a 17 inch wheel, and even better suspension components fitted. 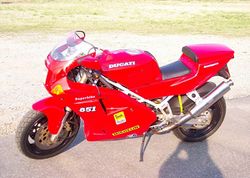 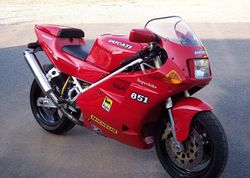