The engine was a liquid cooled v2, four-stroke. A 94.0mm bore x 61.2mm stroke result in a displacement of just 849.4 cubic centimeters. Fuel was supplied via a desmodromic valve control.

The bike has a 6-speed transmission. Power was moderated via the wet multiplate with hydraulic control.

It came with a 120/70-zr17 front tire and a 180/55-zr17 rear tire. Stopping was achieved via double disc in the front and a single disc in the rear. The front suspension was a showa 43mm fully adjustable usd fork while the rear was equipped with a progressive linkage with fully adjustable showa monoshock. aluminum single-sided swingarm. The 848 was fitted with a 4.09 Gallon (15.50 Liters) fuel tank. The bike weighed just 370.38 pounds (168.0 Kg). The wheelbase was 56.3 inches (1430 mm) long.

The Ducati 848 is a Template:Convert L-twin sport bike manufactured by Ducati. It was announced on November 6, 2007 for the 2008 model year and replaces the 749, although the 848 model name was already listed on the compatible parts table for the 1098 fuel tank, giving away the secret a few months early. The 848 makes a tested Template:Convert at 10,000 rpm and Template:Auto ftlbf at 8,250 rpm.[2] With a manufacturer claimed dry weight of Template:Convert, the 848 undercuts its larger displacement sibling, the 1198, by Template:Convert.

The trellis frame of the 848 uses tubes of a larger diameter with thinner walls than the 749, arranged in a simplified pattern, like the 1098.[4]

Although the 1198 and 848 share many similar components, as per the 916/748 and 999/749 models, the 848 uses a wet clutch rather than the traditional dry clutch of previous superbikes from Ducati. The manufacturer claims it reduces weight, improves both service life and "feel" of the clutch and reduces noise.[5] Ducati has in the past held to only dry clutches in accordance with marketing their bikes as obeying the design imperatives of racing above all, unlike, as Ducati would have it, ordinary street bikes.[6] While a dry clutch "rattles like a bucket of rocks,"[7] Ducati and its adherents felt the clutch's "typical noise is music to bikers' ears."[6] The 848's wet clutch is a stark departure from this, because, "Ducati made it very clear that there is a new philosophy within the factory to develop each bike with specifications and capabilities that are aligned with the bike's target audience and intended environment."[8] 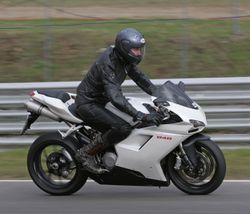 The four-caliper front brakes are cast rather than machined monoblocs, resulting in greater braking effort than on the 1098, in spite of the 848's lighter weight.[4]

The 848 shares more physical and technical design elements with the stronger 1198 than with its predecessor, the 749, including:

The 2008 MY Ducati 848 has, at its heart, a liquid-cooled, four-stroke, 848cc, 90-degree V-Twin desmodromic engine paired to a six-speed manual transmission, that can reach a maximum power output of 134 horsepower and 96 Nm of torque.

This machine is one of the lightest in its class, tipping the scale at just 168kg (369lbs), and has features such as lightweight, Marchesini wheels, a MotoGP-derived braking system with Brembo Monobloc calipers, a fully-adjustable 43mm Showa upside-down fork, a fully-adjustable Showa monoshock in the rear with a progressive linkage, an under-seat mounted, dual exhaust system and a two-piece, dual seat. 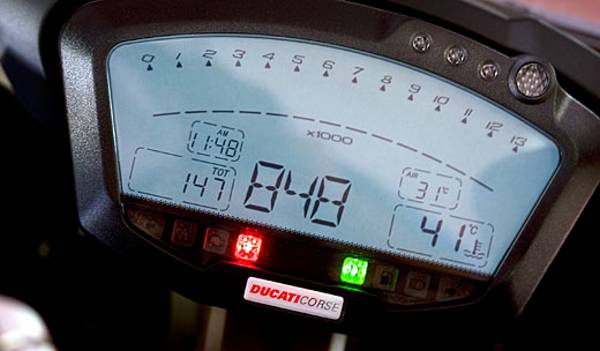 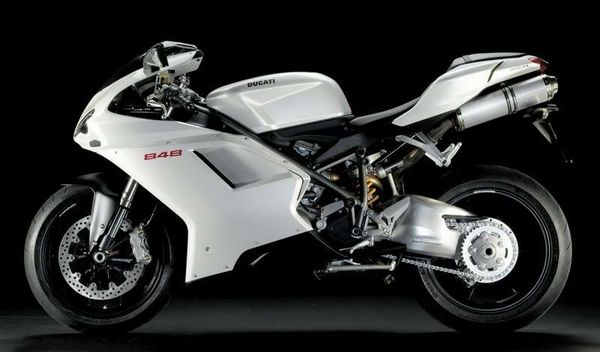 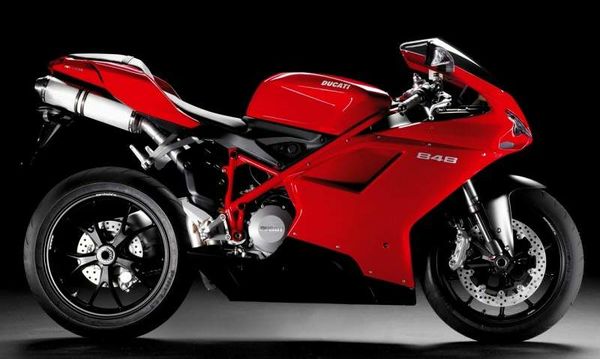 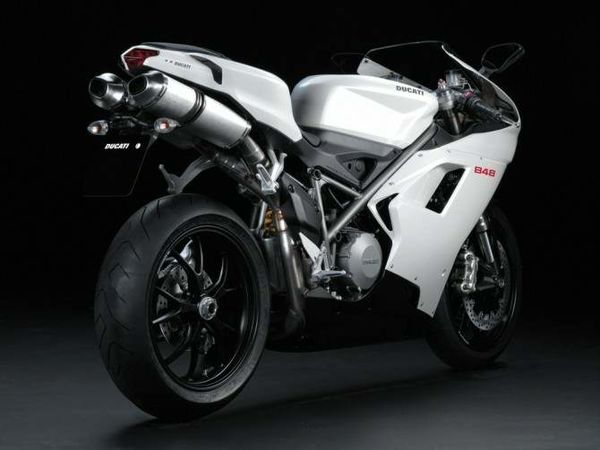 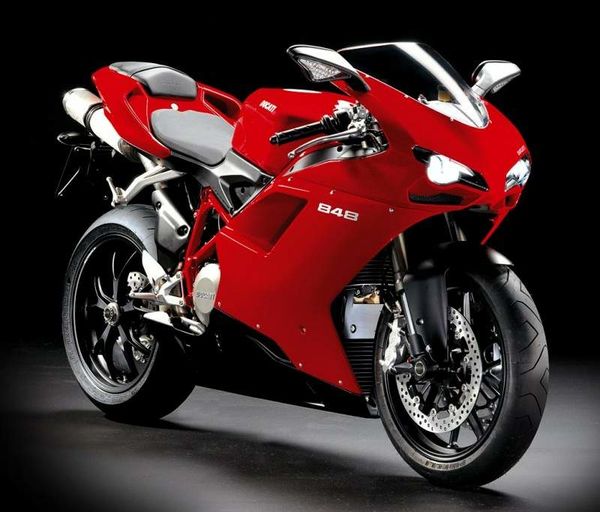 The 2009 MY Ducati 848 boasts race-inspired features and technologies, derived directly from Ducati's very-experienced MotoGp team. It has fittings such as lightweight, Marchesini wheels, a MotoGP-derived braking system with Brembo Monobloc calipers, a fully-adjustable 43mm Showa upside-down fork, a fully-adjustable Showa monoshock in the rear with a progressive linkage, an under-seat mounted, dual exhaust system and a two-piece, dual seat.

In the engine department, it comes equipped with a liquid-cooled, four-stroke, 848cc, 90-degree V-Twin desmodromic powerhouse mated to a six-speed manual transmission, and can produce a claimed 134 horsepower and 96 Nm of torque.