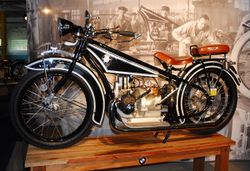 The R32 was the first BMW motorcycle ever manufactured. It was powered by a boxer engine that produced 8bhp at 3300 RPM. It was a rather expensive motorcycle but sold well due to it's clever design and nice fit and finish.

The bike has a 3-speed transmission. Power was moderated via the single plate dry-cable operated.

The 1923 BMW R 32 has, at its heart, an air-cooled, four-stroke, 494cc, single vertical cylinder engine mated to a three-speed manual transmission, capable of producing 8.5 horsepower at 3200 rpm. This machine also came with laced wheels, a center stand, a parallelogram front suspension coupled to a hard-tail rear, a single sprung seat, a rear luggage rack, drum brakes in the front and in the rear, a front luggage rack, a small headlight and wide handlebars.