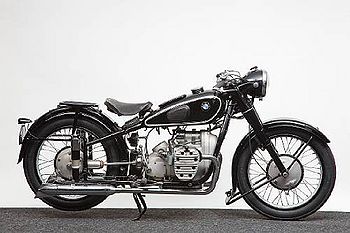 An important development in the history of BMW's long-running flat-twin occurred in 1936 with the introduction of a welded, tubular steel frame on the R5 model, replacing the pressed steel chassis used hitherto. The R5's 500cc overhead-valve engine likewise was new and the following year a 600cc side valve derivative was introduced on the R6, a touring model intended for sidecar duty. In 1938 the R5 and R6 were updated, gaining a telescopic front fork and plunger rear suspension to become the R51 and R61, while the range was further extended by the introduction of a bored-out-to-750cc version of the latter – the BMW R71. The R71 engine only produced a relatively modest 22bhp but its biggest virtue was exceptional flexibility, which was just what its intended market required. Approximately 1,800 R71s had been made by the time production ceased in 1941. Post-war the design was revived in the USSR as the Ural.

The engine was a air cooled two cylinder boxer, four-stroke. A 78.0mm bore x 78.0mm stroke result in a displacement of just 746.0 cubic centimeters. Fuel was supplied via a overhead valves (ohv).

It came with a 3.5-19 front tire and a 3.5-19 rear tire. Stopping was achieved via expanding brake (drum brake). single in the front and a expanding brake (drum brake) in the rear. The front suspension was a cartridge while the rear was equipped with a twin shock-swingarm. The R71 was fitted with a 3.7 Gallon (14.00 Liters) fuel tank. The wheelbase was 55.12 inches (1400 mm) long. 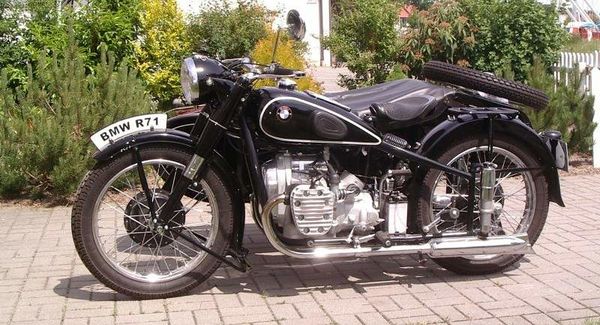 The 1938 BMW R 71 is one of the most powerful machines designed by the House of Munich up to date. It sports an air-cooled, four-stroke, 746cc, boxer twin cylinder powerhouse mated to a four-speed manual transmission and can produce a claimed 22 horsepower at 4600 rpm. Standard features include full-fenders, a rear, fender-mounted luggage rack, laced wheels, a dual exhaust system, a telescopic front fork, plunger shocks, a sprung single seat and a large, round headlight. In addition, it can be fitted with a sidecar.